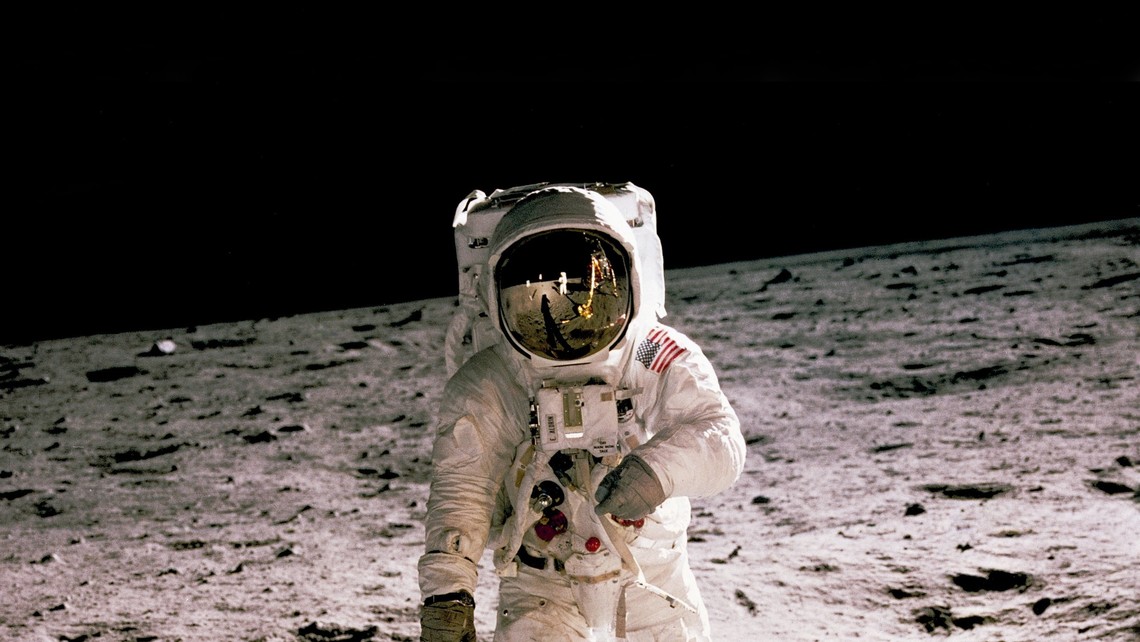 Fifty years ago, July 20, 1969 (it was on a Sunday), my triplet sisters and I turned three months old. “In the Year 2525” by one-hit-wonder duo Zager and Evans was #1 on the Billboard Hot 100. The #1 movie was The Wild Bunch, starring William Holden and Ernest Borgnine. The #1 TV show was the hippy-dippy Rowan &amp; Martin&#39;s Laugh-In.

Against this backdrop of an America whose youth were either dying in Vietnam War or getting deferments, the world witnessed one of the greatest achievements in human history. Its consummation involved no less than 400,000 Americans working to answer the challenge set forth by President John F. Kennedy on September 12, 1962, to set a man on the Moon and return him safely to earth safely before the end of the decade. “We choose to go to the Moon,” he said.

And we did it. The United States did it. We did it with slide-rules and Newtonian Physics. So much could have gone wrong during the Moon landing that it’s nearly impossible to exclude God from the equation of the success of Apollo 11. Think, for example, about the near-disastrous landing. As the lunar module Eagle descended to the Moon, a tiny navigational error resulted in overshooting its touchdown spot by four miles. Eagle was headed straight for a lunar pit filled with boulders. Armstrong shut off the onboard navigation system and flew Eagle slowly over the lunar surface as he eyeballed a place to land. As he did so, he was using up fuel required for Eagle to return to lunar orbit and dock with the orbiting command module Columbia. Eagle was given only 136 seconds’ worth of fuel to complete its landing. When Armstrong found the right spot and cut Eagle’s engines, only 18 seconds of fuel was left to spare.

Then there was the most dangerous part of the mission: “Lunar Orbit Rendezvous.” Called LOR by NASA and calculated to mathematical perfection by John Houbolt, a farm boy from Iowa. LOR required something akin to getting a hole-in-one on a golf course with a tee 120 miles away. Eagle had to achieve a perfect mid-space docking with the orbiting Columbia. If it missed entirely, Eagle and crew would never return to earth. If it missed by a few inches, both vehicles could have been sent spinning and colliding with each other.

Do you think God was with those men? Just seven months prior on December 24, 1968, as the three astronauts on Apollo 8 orbited the moon, they read the opening words of Genesis, chapter 1, verses 1-6. Commander Frank Borman concluded saying, “A Merry Christmas – and God bless all of you, all of you on the good Earth.” Before exiting the Eagle to step of the lunar surface, Buzz Aldrin, an elder at his Presbyterian Church, partook of communion elements he brought with him (a wafer and small capsule of wine). Many astronauts who walked on the Moon would in later life speak of a Presence there – a powerful and conscious Presence.

Three and a half years later (I was almost four), I clearly recall watching the TV in our small living room to see the astronauts of Apollo 17 splash down into the ocean. I was munching on some Hanukkah candy (chocolate-filled straws). The date was December 19, 1972. That night, I looked up at the moon. It was almost full. “How did those men get there and back?” I thought.

As I celebrate the fifty-second anniversary of my natal day, I have begun to think... END_OF_DOCUMENT_TOKEN_TO_BE_REPLACED

The following is the text of the Message of the Holy Father Francis for Lent 2021, entitled: “Behold, we are going up to... END_OF_DOCUMENT_TOKEN_TO_BE_REPLACED