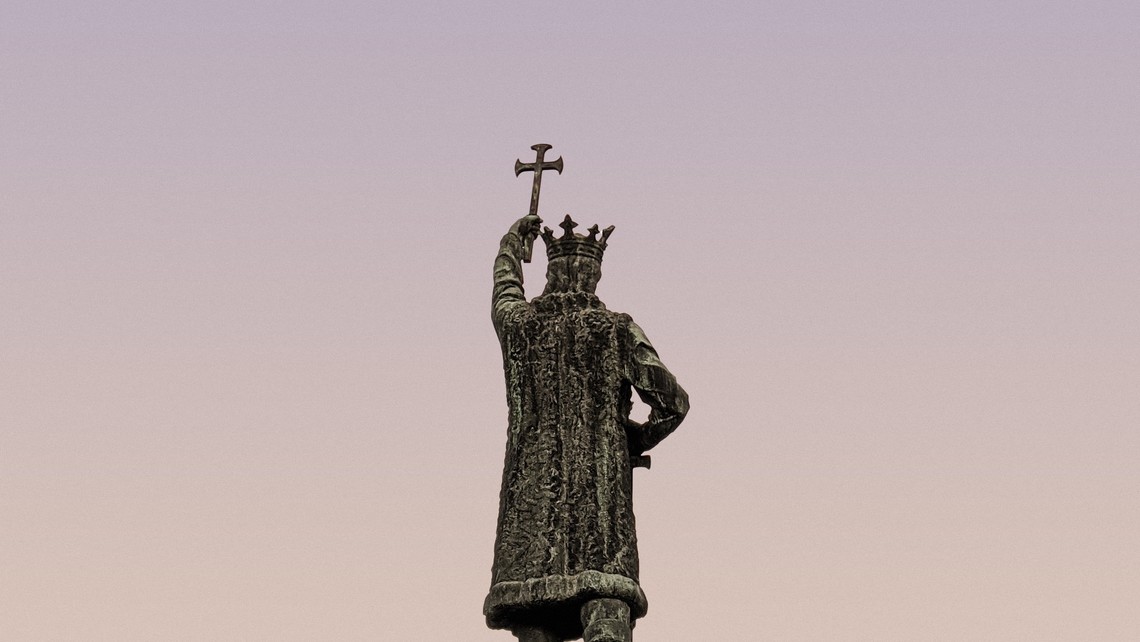 I wish again to thank so many of you who attended, either in person or through live-stream, our Sunday evenings of Adoration and Rosary for the intention of protecting our churches and symbols of the Catholic Faith from arson, vandalism, and destruction.

I think the first statue of a Catholic saint to come down in the United States was that of St. Junipero Serra in San Francisco’s Golden Gate Park. The protesters caught everyone unawares. Since it’s a public park, I suppose the restoration of the statue would be the decision of local authorities.

The charge leveled against St. Junipero Serra was genocide (or at the very least, what has been named “cultural genocide”). Is that charge true? Junipero Serra did indeed convert many Native Americans along the California coast to the Catholic Faith, and indeed he also brought with him his Spanish culture, and with it Spanish conquest. So one can see their argument and why there was such fury when his statue was pulled down from its pedestal.

However, like most things in life, the history of the conversion of the Native American peoples requires study and a lot of real critical thinking. Here is something of which most people today are unaware: While “Native American” is a term that is useful as a shorthand, in reality, there are no such people. And I’m not referring to the fact that there were originally no humans in the Western Hemisphere until the last ice age. Rather it’s because the various indigenous peoples of our continent were itinerant, with one tribe displacing another; then again; then a migration of one tribe; or a tribe’s assimilation into another; or tribal extinction.

Look at a map of the tribes in the California area around the time Fr. Serra’s arrival. There were between twenty-five to forty or so tribes (depending on which ones you want to include) with some relationship to California’s coast, the cultures of some tribes being similar, of others quite distinct, and they were very often engaged amongst themselves in war. That’s because coastal property was, as it is today, valuable real estate. Also, because much of the southern coastal area is a desert, water from the coastal mountain ranges was absolutely necessary for life, too; so there was war for access to fresh drinking water. To get a sense of the continual state of warlike footing that existed there, just think of European history and its various wars, then multiply that a few times. Some tribes also put into slavery the prisoners captured from neighboring tribes.

So when Fr. Serra arrived in California with his contingent, the native tribes simply perceived another “tribe” to content with. But this new “tribe” brought with it the Catholic Faith.

Many native tribes found the governance and religion of this tribe from half a world away preferable to their own religious practices, some of which were humane and peaceful, yet some of which were bloody requiring human sacrifice. Thus, with the arrival and acceptance of the Catholic Faith, began the process of unifying these tribes into cooperation and the liberation of peoples. To connect the new affiliation of tribes, Fr. Serra was responsible for establishing a network of mission churches along the coast and roads to connect them which exist to this day. So while there were most certainly conflicts between Fr. Serra’s contingent and the locals, in general, the process of culturation was widely accepted as a change for the better.

This is why our current Holy Father, Pope Francis, who is, of course, renowned for his concern for indigenous peoples and his general feeling against past European colonization, had no difficulty in canonizing Fr. Serra. Could anyone imagine Pope Francis canonizing someone whose actions in any way were genocidal? It’s absurd to think that he would.

A similar charge was leveled at St. Louis IX. Did he kill thousands of Jews as activists claim? Did he launch a bloody Crusade to murder Muslims? Here’s the best of what I could find. First, I can’t find any information from the best historian I know (Dr. Thomas Madden at St. Louis University) to suggest St. Louis killed any Jewish People. What did happen all too often – and this is quite terrible – is that when a Crusade was launched by the pope or in the instance of the sixth and seventh crusade St. Louis, inevitably some with bad intentions joined the movement and they used it as an excuse to slaughter (yes slaughter) Jews in various places. They did so because, in some cases, they didn’t like the Jews competing with them in the business of trade; but in other cases, they were truly anti-Semitic attacks. But these attacks were never – and I repeat never – commanded by the pope or any European King. In fact, the popes issued official statement after statement: The Jews are to be respected and not killed. However, despite these commands from the pope and St. Louis, anti-Semitism ran deep among some in Europe, especially the less educated. And as they say, you can’t fix stupid.

You’ll notice that the slaughtering of Muslims wasn’t the purpose of the Crusades. Of course, there were battles during which Muslims and Christians were killed. Again, consider St. Louis and Harry Truman: the terrible War of Israeli Independence which commenced immediately after Israel’s statehood was announced.

Now back to the anti-Semite question. About the same time as Louis became king, it was brought to the attention of the Christian world a strange book that Jews were using for religious instruction called The Talmud. It is a vast series of commentaries on the Hebrew Scriptures with commentaries on commentaries, stories, and parables. It had been amended many times for about one-thousand years until standard versions were compiled. When Christian scholars with a reading knowledge of Hebrew first read The Talmud, they were thoroughly perplexed. Christians had simply assumed that Jews continued their perennial practice of using their Scriptures for instruction. Despite their choice to reject their Messiah, Christians nonetheless respected the Jews because they had preserved the religion of Jesus Christ. Yet this strange book had supplanted the Scriptures as the primary source of Jewish instruction. The Christians were therefore concerned that contemporary Judaism had been altered fundamentally from its original form.

Then there were the stories about a figure named Jeshu. Not all, but a good many of the stories about Jeshu were unmistakable references to Jesus of Nazareth. He is called a magician, a sorcerer, an apostate who claimed messiahship, then goes to hell. His Mother was a whore who conceived Jeshu by a Roman soldier. There were insults against Christians as well.

When King Louis learned about The Talmud and its problematic nature, he did something rather enlightened for his time. He did not act rashly or start a persecution. Instead, he decided to give the best Jewish scholars of the day a fair hearing. He convened a disputation of Jewish and Catholic scholars to study the matter. In general, it was the Catholics on offense and the Jews on defense. In the end, certain passages of The Talmud were judged so offensive that it was deemed a sin against the virtue of religion for such a book to be allowed to exist in a Catholic nation. St. Louis obliged with the decision by ordering that all in editions of The Talmud in Paris be confiscated and burned. Any Jew hiding a copy would face a penalty.

Moreover, to prevent the Catholic faithful (who were by now curious about this strange book) from perhaps being corrupted in their faith, the Jews were ordered to wear armbands with a Star of David. Regrettably, when we think of an armband with a Star of David we think of the Nazis and their rationale for the armbands (the extermination of Jews). St. Louis’ intention was to establish a clear ornament of dress which had no greater stigma than a Jew wearing a yarmulke (little round hat) in public or a Muslim wearing a burka or me wearing my blacks and collar to the grocery store. Everyone back then wore clothes that communicated their status in society, their profession, their position, their membership in a guild or religious confraternity, et cetera.

Well, I got carried away, didn’t I? But now you know, as Paul Harvey used to say, “the rest of the story.” For next week I’ll give you all a break by having two editions of Dash’s Question Box.